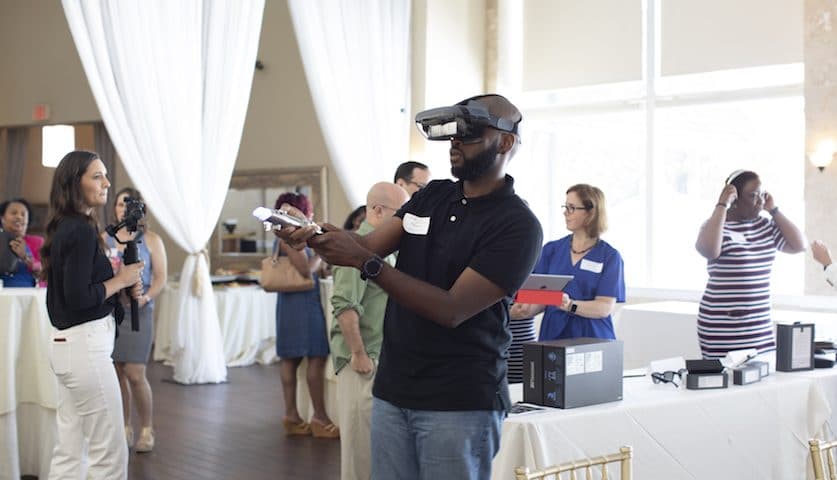 Taking place last week at downtown’s The Piedmont Room, attendees got to demo the very best in immersive AR/VR hands-on experiences that are transforming the way we experience the world. Exhibitors included CTA members such as Bose, Lenovo, and Amazon, at the invite-only event.

If a family purchases a headset for their home, we want the mom to consider how she can use it too, said Danielle Cassagnol of CTA speaking on the hand-selected offerings.

One such platform is Healium, a wellness app that’s said to reduce moderate anxiety and increase feelings of positivity in as little as four minutes. With subscription starting at $29 a month after a $500 hardware kit purchase, users can access a number of story-driven escapes such as beach relax, cherry blossoms, magic snow globe, and light the sun. The scenes are incredibly tranquilizing, using the power of neurofeedback sent through wearables to boost your mind. 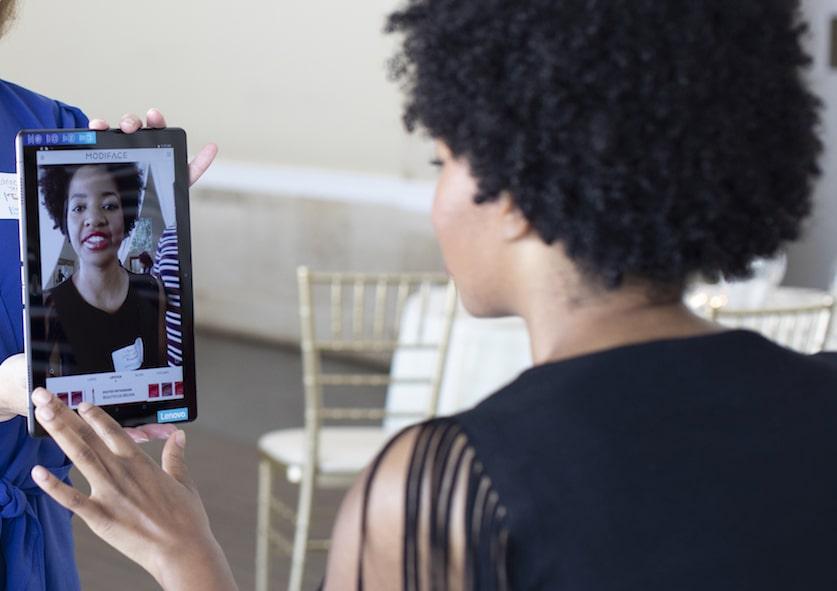 “To me, AR and VR is above your head for a lot of people, a lot of moms, wondering how does it impact my life? But when you break it down to a pair of sunglasses that you can wear that have audio Bluetooth speakers so that you can run and still hear somebody behind you or traffic crossing, it adds safety to your life,” said Desiree Miller, one of the organizers of the event.

“If you can wear a headset that instantly transports you to the beach because of the VR technology and you have mental wellness in an instant, those things are life-changing. That’s what I love about an event like this. I get to find out about these really amazing new products that I probably wasn’t going to go shop for in a store.”

Guests were also entertained with a more familiar wearable accessory like Bose audio-enabled sunglasses. The retailer known for selling speakers and headphones says with this latest launch they have created their smallest, slimmest speaker.

The AR/VR lifestyle event had both styles of Bose Frames Alto and Frames Rondo to try out. They may have looked like a regular pair of fashionable specs but by design, the patented acoustic chambers sit towards, not on, the ears to deliver top-notch sound quality. They retail for $199.95. 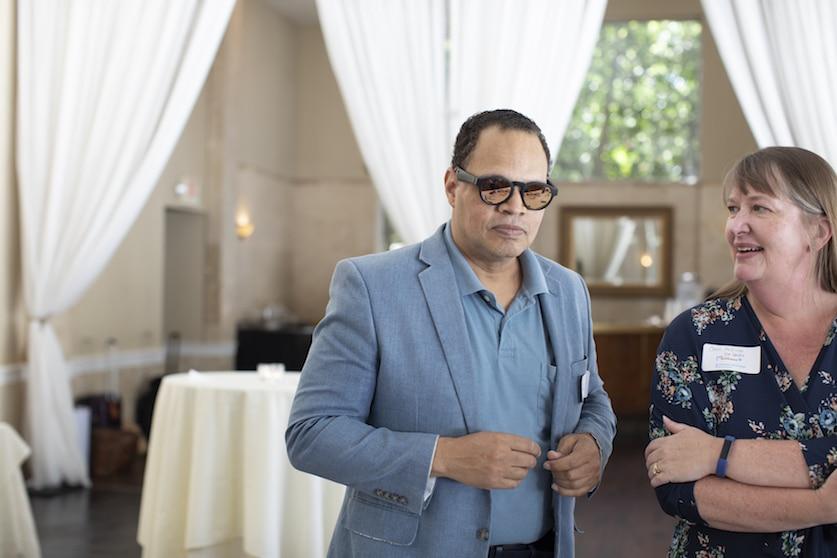 Attendee at the CTA and Techlicious AR/VR Lunch & Learn

While the audio is obviously Bluetooth powered, this is another introduction to Bose AR, its first-of-its-kind audio augmented reality platform and Bose AR-enhanced Apps. Other devices that use the Bose AR are QC35 headphones II and Bose Noise Canceling Headphones 700. The latter, which was also on display, boasts the impressive ability to answer calls and access voice assistants. The headphones retail for $399.

The Amazon Shopping App was yet another astonishing display of advances in technology. It’s for the buyer who wants to take the guesswork out of purchases and curb the dreaded act of having to make a return. Using augmented reality, consumers can test out purchases such as large furniture, right in the comfort of their home or office. This allows for better feasibility of space, decor coordination, and much more. The downloadable app is free of charge.

During a special presentation, Cassagnol and Suzanne Kantra, Founder and Editor of Techlicious, shared how AR/VR is progressing many of the markets that were present, such as retail, health care, and education, and ones outside the home, including construction, real estate, and training. Cassagnol even mentioned that in virtual reality training for surgeons the success rates are increasing their accuracy.

Each year many of these companies convene in Las Vegas for CES. In the 2020 edition, they are expecting more than 4,000 exhibitors along with the customary major brands and startups.

Kantra articulated the nuances of consumer electronics as they get more advanced. She gave an overview of how fundamentally AR/VR is changing the way we live. For instance, think about how a decade ago we didn’t have Google Maps. When we needed to know where we were going, we had to look at physical maps. Now, with applications like this enhanced with virtual reality, users can have the best possible experience without worrying.

While many AR/VR conversations might go over most people’s heads, entities like CTA and Techlicious are breaking down any barriers to understanding. These products are indeed meant to make people’s lives better. Without a doubt, newbies will appreciate the practicability factors in their own homes and lives.