Confessions of an African-American albino

Afya Ibomu is a vegan. She is one of a relatively small, but growing, number of African-Americans who have given up animal-based food products.

Her decision to convert to veganism was motivated by poor health; she suffered from asthma, allergies, irritable bowel syndrome, and chronic dehydration as a child. “I became a vegetarian at age 15,” says Ibomu. “My health improved somewhat, but it did not completely get better until I became a vegan.”

In fact, despite African-Americans traditionally being known as meat eaters, a number of black A-list celebrities have become advocates of the vegan lifestyle, including the likes of Erykah Badu, Russell Simmons and Mike Tyson.

Even Oprah Winfrey recently highlighted the veggie cause, by going on a 21-day vegan cleanse. In her blog, chronicling the ups and downs of the diet, she wrote, “I am, for sure, more mindful of my choices.”

“I’m eating a far more plant-based diet,” Winfrey continued. “Less processed food. Thinking about sugar and fat consumption not in terms of calories, but in terms of what happens to my well-being.”

Ibomu, author of The Vegan Soul Food Guide to the Galaxy, and who at one time was the personal nutritionist for Erykah Badu, says high-profile vegans are making plant-based diets and healthier eating options “more visible” in the black community. 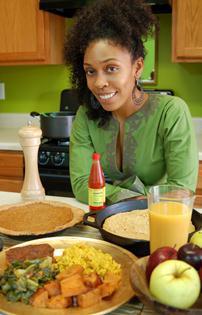 Traci Thomas, founder of the Black Vegetarian Society of Georgia, which organizes the annual Meat Out-Vegetarian Food and Wholistic Health Fair in Atlanta, says attendance has trebled in just five years, with more vegetarians and vegans coming through the doors.

Princess Dixon, is owner of Healthful Essence, a black owned Atlanta restaurant which specializes in Caribbean style vegan cuisine. She explains that, in her 20 or so years of running the eatery, there’s been a huge increase in the number of people sampling the menu, such as André 3000, Boris Kodjoe and retired NBA basketball player John Salley, who all want to “embrace the vegan diet.”

About 3 to 5 percent of U.S. adults are considered full-fledged vegetarians, and about 1-3 percent of people are vegans, says the Vegetarian Resource Group.

“Back in the 1970s, people didn’t even know what the word vegan meant,” says Charles Stahler, co-director of the organization,” In those days less than 1 percent of the U.S adult population was vegetarian, and less than half a percent vegan.”Vegetarians avoid meat, fish and poultry, whereas Vegans eat no meat, fish, poultry, eggs, or dairy products. “The vegan diet is the most beneficial to maintain and restore health,” says Tracye McQuirter, author of By Any Greens Necessary and co-founder of the New York Black Vegetarian Society.

McQuirter, who went vegan 25 years ago, says there is a clear connection between food, diet and health. Many people are aware it is good to eat fruit, vegetables and whole grains but most are not aware of just “how unhealthy meats and dairy products can be,” she says.

Dixon, who is in her seventies, has been a vegan for 26 years and attributes her good health to her vegan lifestyle and 70/30 raw food diet. “I’m energetic and run this place 8 hours a day, six days a week,” she says. “I’m not on any prescription drugs and have no health issues. I feel great”.

On average, black Americans are disproportionately affected by obesity, diabetes, high cholesterol and high blood pressure. “Most of these are lifestyle diseases,” explains McQuirter. “We are talking about diets high in saturated fat and cholesterol, and sedentary lifestyles.”

Indeed, there’s a growing body of anecdotal evidence, backed by medical research, that backs the theory that vegetarian, or the stricter form veganism, can improve heath.

Ibomu, has seen a rise in some sections of the black community becoming more focused on a healthier lifestyle. Even if they do not opt to become vegetarian or vegan they want to turn their diet around, she says. They are doing “meat free Mondays” or “a meat free month” and eating more whole grains, fruits, vegetables, beans and nuts, and less sugar and junk foods.

Rev. Al Sharpton, for instance, has recently announced he has eliminated meats from his diet and become a vegetarian, to better his health and for ethical reasons. Venus Williams has also embarked on a vegan diet to improve her health after being diagnosed with Sjogren’s syndrome, an autoimmune disease.

Eco-chef and author Bryant Terry, who describes himself as a food justice activist, is passionate about healthy food options for people in poor or urban communities. “My goal isn’t just to convert people to veganism”, says Terry, who last month published his latest book, The Inspired Vegan.

“It’s about responding to the public health crisis which Americans, especially African-Americans, are experiencing,” adds Terry. “Plant based vegan diets can be a useful tool to address this crisis and transform communities.”

Still, veganism has received a fair amount of criticism. Opponents argue, while it is possible to get all of the essential nutrients on a vegan diet, it is extremely challenging. Others say the food is bland.

Advocates, though, say the informed, health-conscious, fresh vegan diet is healthy, delicious and nutritious. The word “vegetarian” or “vegan”, however, is not a synonym for healthy, says Ibomu. “It’s not just about eliminating meat and eating junk food.”

Dixon agrees, “it’s not only about being vegan you need to regularly detox, perhaps four times a year and drink plenty of water every day and incorporate more raw foods in your diet.”

It’s important, especially for people of color, not to get caught up with labels such as veganism or vegetarianism, says Terry, but to focus on a healthy diet choices based on age, climate, geography, body constitution and ancestral foodways.

It seems whatever label people use to describe their diet as long as what they eat is balanced and nutritious, it can help promote good health and long life. Fruit, veg and whole foods has to be part of that equation.