Mystery behind ‘The Dress’ revealed

Nigerian-born Makinde Adeagbo is a software engineering genius who has worked for high-profile tech companies such as Facebook, Dropbox and most recently Pinterest.

Straight out of the Massachusetts Institute of Technology (MIT), Adeagbo joined the Facebook team as a software engineer. At the time the giant social media company only employed about 300 people. 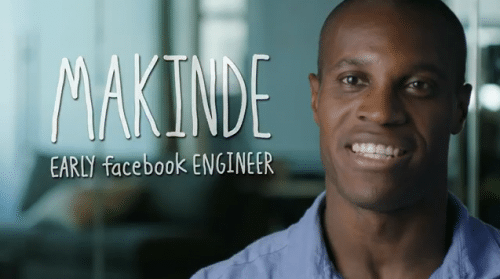 Former Facebook engineer Makinde Adeagbo is now the software engineering manager at Pinterest. Adeagbo has featured in a short film entitled ‘What Most Schools Don’t Teach’ alongside Bill Gates, Mark Zuckerberg and Jack Dorsey, among others.

During his stint there, Adeagbo was one of the key figures that helped reduce the site’s storage use from 1 MB of JavaScript to only 2 KB.

“My first day my manager was like ‘hey, the site’s going to go down in a few days if we don’t fix this class of issues, so could you just do that?’ And walked away. I was fresh out of school, and basically had no idea what I was doing,” he said in an interview with Tech Republic.

After working at Facebook for close to four years, he transitioned to being a software craftsman at Dropbox in the San Francisco Bay Area.Since July 2013, he has been working as the engineering manager at Pinterest.

Adeagbo’s passion for computer science began in middle school when he would program games in his graphing calculator. In high school, he pursued his love for programming and would build games in C++. “It was a great feeling – a​ll you needed was a computer and determination… with that, the sky’s the limit,” he told Pinterest.

“A lot of the coding that people do is fairly simple,” he said in the film entitled ‘What Most Schools Don’t Teach. “It’s more about the process of breaking down problems than coming up with complicated algorithms as people traditionally think about it.”

The type of problems Adeagbo enjoys working on are the ones affecting people’s lives.

“Every time I travel and get anywhere more than 50 miles away from the bay area, and see the real world and more so traveling internationally, so I’d love to focus on regular problems in the world with a more fundamental impact on how people live, and apply these skills to a broader set of problems,” he added in his chat with Tech Republic.

Adeagbo advises aspiring and practicing engineers not to box themselves in trying to achieve their goals.

“Try not to limit yourself — by that I mean when I applied to Facebook, I read the job description for software engineer and it said you need six years experience with PHP, and these lofty requirements. I wasn’t anywhere close, and I applied.

“When I got the interview, I thought ‘they’re going to destroy me,’ and I did well, and none of that would have happened if I thought that when I read the description of the job,” he said to Tech Republic.