Inside Silicon Valley’s struggle for diversity 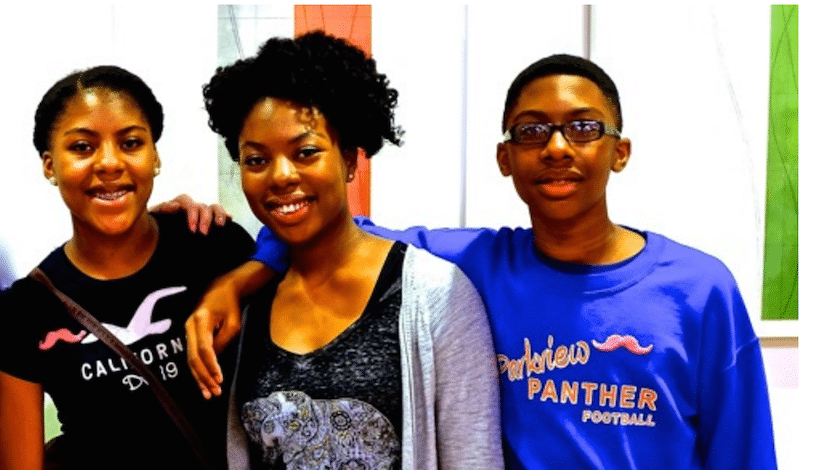 Three insanely talented siblings from metropolitan Atlanta have won the 1st place prize of $22,000 for their mobile app at the Innovating Justice Challenge in The Hague, Netherlands.

After a rigorous selection process, the trio was selected as one of three finalists from hundreds of entrants from across the globe. They flew out to The Hague in December to pitch to a panel of judges before eventually winning the Innovating Justice Award designed to promote innovation in the rule of law.

Caleb Christian, 15, and his two sisters — Ima, 17, and Asha, 17 — say they were motivated to create the Five-O app after a traumatic experience with law enforcement in their home. They decided that there needed to be an online forum to review police officers’ interactions with the communities that they serve.

Their app empowers citizens to rate, review, and track their interactions with law enforcement. Users hold officers accountable and build a community where citizens can come together and review personal experiences with individual officers and law enforcement departments. 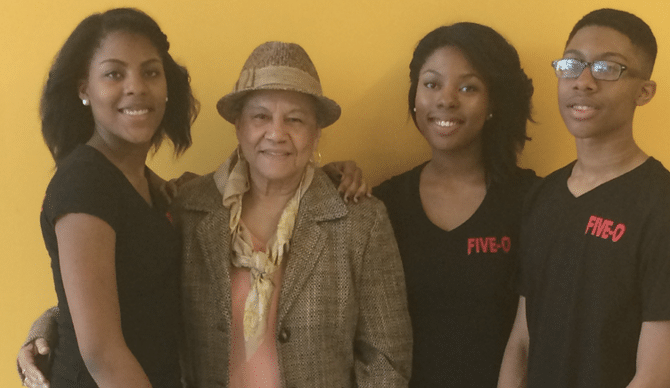 Ima, Asha, and Caleb with their grandmother

In an interview with UrbanGeekz, Asha Christian said her family’s personal experience with local law enforcement officers brought home the challenges of being at the receiving end of police authority.

While at home with her siblings and parents, police knocked on their door and when they opened it, the officers barged in with their guns drawn. Asha said that the police had received a prank call that someone was being held captive in their home.

“They looked through the house and saw there was no one being held captive of course,” Asha said. “But we were already put on edge and scared about what had occurred. So it really put us face to face with the problem.”

With the ongoing tension between police and some communities highlighted by cases such as Sandra Bland and Eric Garner, Asha said their mission is to be problem solvers.

Some of Five-O’s features include incident reports on officers and community message boards where users can communicate their positive or negative law enforcement experiences. Users even have an area where they can report an officer’s badge number and rank the interaction.

The system then aggregates all scores for a particular county or police officer and assigns by county and officer a dynamic grade for courtesy and professionalism. Users are also able to search incident comments by county, state and officer identification number in order to access incident descriptions posted by other users.

Anyone can log onto the app, type in their location, and view the scores. Users can also see a list of their basic rights in the app in order to make informed decisions.

Growing up in a middle-class household, the talented siblings developed strong programming skills. By the time they reached middle school, they were participating in programs such as MIT’s K12 Scratch and App Inventor. With their parents’ encouragement (both have backgrounds in technology), they also learned JavaScript, HTML, CSS, and Java.

Ima (who is older than Asha by a few months) skipped a year at school and is currently studying a Computer Science major at Stanford University.

When the opportunity arose to showcase their new app, they jumped at the chance. “When we found out we had won 1st place, I couldn’t stop smiling,” Asha said. “The mentorship and connections that we received there is really going to help us in building Five-O.”

With the prize money of €20,000 (approximately $22,000), the siblings are going to build an updated version of the app by employing more people into their team and target marketing the app to more major cities such as Chicago and New York.

“There hasn’t really been another app that gives citizens a voice–an unbiased voice– and is searching for the truth in what happened,” Asha said. “So if positive interactions occur, put in those interactions because we want to know where police officers are doing well, as well as where they need to do better. We want both sides of the interaction and with Five-O, we are really focused on getting all of that data.”