How to Create a Successful Mobile App

Ascend2020 ATL Kicks Off With Inaugural Cohort For Minority Founders 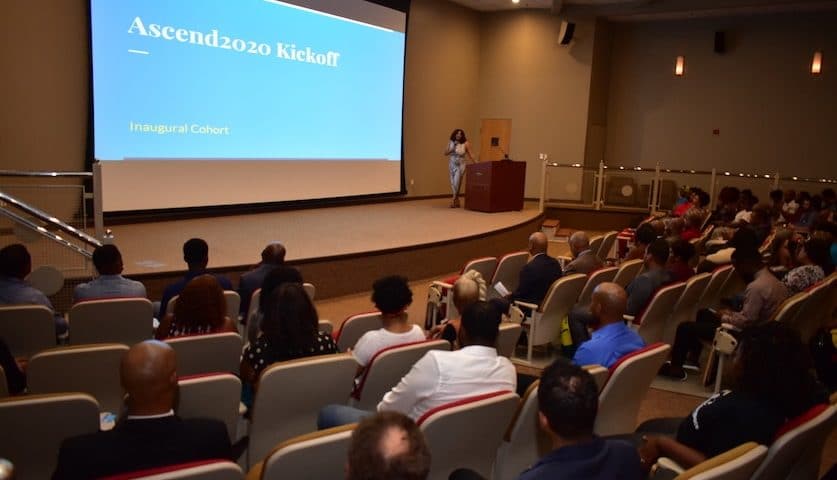 A new initiative kicked off this week to connect minority entrepreneurs with much-needed resources to launch, grow, and scale their startups in Atlanta.

Ascend2020 is a nationwide program spearheaded by JPMorgan Chase, which partners with business schools across the country to create a supportive ecosystem for untapped entrepreneurs. After a rigorous selection process, selected companies access mentorship and capital at various stages of their development, whether it’s at the ideation, early, or growth stage.

With the pilot program launching in six cities, Morehouse College is leading the effort in Atlanta, a thriving tech hub and the biggest tech epicenter in the Southeast.  The launch event for the inaugural cohort of Ascend2020 took place on Tuesday at the Morehouse campus.

Dr. Tiffany R. Bussey, Director of Morehouse College Entrepreneurship Center, said that a conversation with Michael Verchot, Director at the University of Washington Consulting and Business Development Center, three years ago set the precedence for the program’s foundation. “[We were talking about] how wonderful it would be to have an institution of higher learning, a university, partner with government agencies and commercial industries to really incubate small businesses,” she said in a face-to-face interview with UrbanGeekz. They envisioned helping minority businesses, ones composed of women, Latinos, or members of LGBTQI comunity. Then, through his connections, Verchot got JPMorgan Chase on board.

Making An Impact In The Community

JP Morgan committed $400,000 to the project through a grant as part of their Small Business Forward initiative released last year. Coincidently, the idea aligned with JP Morgan’s strategic goals. “In every community that JPMorgan Chase is involved in, we want to be impactful in a positive manner,” said Lindsay T. Edwards, Vice President of JPMorgan Private Bank and a Morehouse alumnus. “When we increase the small business owners and entrepreneurs, hopefully, in turn, they give back to the community and ultimately become clients and customers for our firm as well.”

Dr. Bussey says the scheme is important to Morehouse because of who they are – an institution that’s building future leaders – and what they do – changing the community for the better. Three of her former students serve as partners to Ascend2020 through their grassroots microfinance organization called Village Micro Fund. An idea born out of the classroom, its mission is to empower entrepreneurs in Metro Atlanta by providing access to capital, business education, and a “Village” of support.

Their vision, work ethic, and persistence with Village Micro Fund were a catalyst in helping Dr. Bussey to see how to better serve the community. “We must do a better job of preparing [students] to create jobs, to create companies, and to be entrepreneurs,” she said. “From this standpoint, Morehouse has embraced projects like Ascend2020 to engage not only our students but to engage with the communities immediately outside campus and the wider community across the country to create relationships.”

Most startups fail within the first few years, so getting the kind assistance that the program offers is paramount for both new and seasoned entrepreneurs.  For those chosen for the inaugural 2017 cohort, which comprises 30 startups, they also have the guidance of Entrepreneur-in-Residence Candace Mitchell who has been working on her company Myavana under the Techturized LLC for the past five years.

She said making it past those first three years wasn’t easy, so she’s excited to help even more minority-led startups become successful in the tech space. The program is unlike any other in helping minorities get to that scalable stage, says Mitchell.

“The difference between this program and some of the other national programs is we don’t require participants to quit their job, move across the country and go deep in,” she said. Most minorities are not in a position to financially quit their jobs and work on their ideas full-time, so for six months, participants can attend monthly workshops and speaker series in the evenings. Ideally, at the end of the six months, they will be closer to becoming scalable startups.

Mitchell went on to say that when she was growing her business, most of the programs that she and her team got involved in didn’t understand the unique challenges that minorities face. “Ascend2020 is really the first of its kind that’s intentional in helping us build,” she said.

“It’s extremely exciting to see the venture community’s strong commitment to helping high-quality minority-led tech companies flourish in Atlanta,” said John Negron, CEO and founder of Be A Doer, who was selected for the inaugural Atlanta cohort.

“There’s a good mix of companies at different stages of development, from idea stage all the way to $1MM+ in revenues,” added Negron. “Since we’re one of the only consumer media companies in this cohort, I believe the program is going to add major value to our company. We’re looking forward to honing our story, refining the product, and opening new doors to angel and venture capital.”

Another member of the cohort, Doll Avant founder of Aquagenuity, thinks it’s imperative that founders of color don’t get left behind in this new tech age. She’s also behind a platform called “Tech for the People,” and she said with this new wave of entrepreneurship and exponential technology, “entrepreneurship is 21st-century activism.” She went on to say that programs like this really empower people to create companies that solve problems and to have that impact in the community. “If we don’t do it, nobody is going to do it for us,” she said.

Additional program partners include Tech Square Labs, Advanced Technology Development Center (ATDC), and Access to Capital for Entrepreneurs (ACE). At the end of the six-month duration, members of the cohort will participate in a Startup Showcase in April 2018.