The Weather Geek turning into a rising TV star 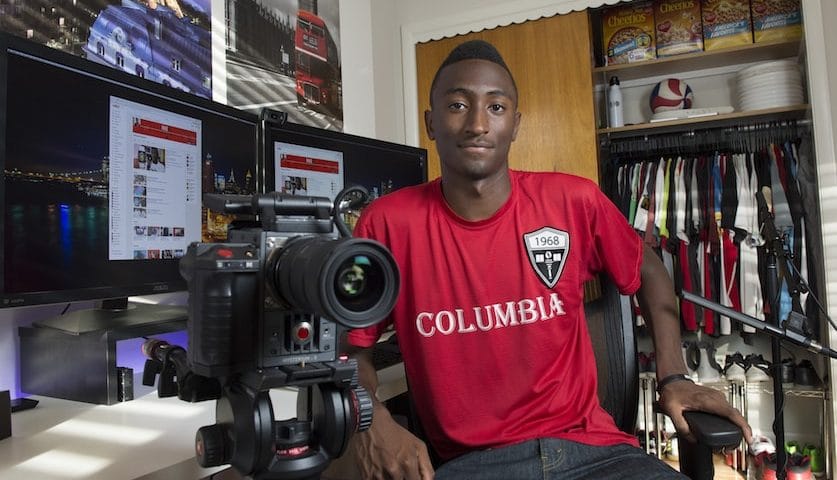 Marques Brownlee is a YouTube superstar. The 21-year-old sensation has over 2.2 million subscribers to his channel, MKBHD, which has gotten more than 200 million views since its launch in 2009.

Best known for his reviews on hand-held devices, Brownlee a.k.a. MKBHD has reached almost cult like status in the tech and gadget space. He is arguably the Internet’s hottest technology reviewer right now.

Industry veteran, Vic Gundotra, former Google VP, hails Brownlee as “the best technology reviewer on the planet right now.” Well, who can argue with that?

His technology reviews are often timely, coming out the same day or soon after the product launches. He tests everything from tablets and smartphones to curved TVs and smart watches.

The lanky 6′ 3” New Jersey native, who also happens to be telegenic, isn’t just good. He is spectacular.

In fact, MKBHD (which stands for Marques K. Brownlee high-def: HD) comes in at number 12 on YouTube’s list of the 100 most subscribed-to “tech and science” channels. Apple ranks at 11 and Google at 5.

Brownlee’s most popular video to date is a review and scratch test of the then yet- to-be released 4.7-inch iPhone 6, uploaded on July 7, 2014. So far, the video, which has featured on sites such as Wired and Time Magazine, has more than 8 million views.

The college senior uploads one to two videos per week. In 2014, he uploaded 93 new videos, which were viewed more than 130 million times.

“I think the most mind blowing statistic [is that] the total amount of time that was spent watching the videos I made in the last year is more than a 1,000 years of human life,” said Brownlee on a recent YouTube video, uploaded on January 1, 2015.

He has hosted his own YouTube channel since he was 14. Over time Brownlee has developed his persona and advertising revenue has enabled him to buy the latest gadgets and devices for his one-man operation.

Now, Brownlee is set to expand his product review empire even further. The tech savvy millennial is posed to launch a website, MKBHD.com. Seems we have a media mogul in the making.