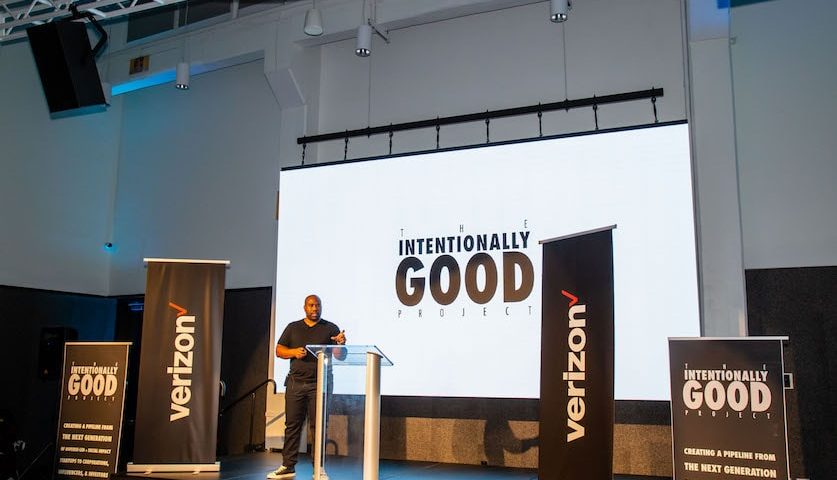 It was one of several key takeaways that Womack, head of the Intentionally Good Project and founder and CEO of Goodie Nation, shared earlier this month at an online gathering of tech ecosystem members and stakeholders. The group convened to discuss the Project’s first year of programming, its evolution, and the next phase of development to create a leak-proof pipeline from new startups to the resources they need to activate their potential.

In its pilot year, the Project accepted almost 50 promising diverse-led or social impact startups out of 250 applications.

Over the course of 12 months, the startups received more than $2 million in investment and winnings, including at the Black Founders Exchange Pitch Competition and Revolt Summit Color in Code Pitch Competition. Some also entered Venture Atlanta, TechStars, Softbank’s Emerge Accelerator, and the Urban-X Accelerator.

“The Intentionally Good Summit was a powerful experience that validated our model for filling the angel investment gap for diverse-led startups and social impact startups with social capital from influential people and large companies works,” says Womack. “Also, the excitement for The Intentionally Good Pledge shows the startup ecosystem is committed to offering office hours, warm introductions, and opportunities to succeed for our startups.”

Sixty influencer connections were made – a boon for two of the Project’s objectives to accelerate relationships with influencers for endorsement and key advisor roles, and large companies for paid pilots and strategic partnerships.

The inaugural cohort was further aided by the national Tech Done Right grant from the Kapor Center, as well as the use of the Abaca tool as a definite guide for assessment. The tool, a roadmap for scaling ventures and raising capital, was secured by a grant from Village Capital. Both serve as lead ecosystem partners to the program along with WeWork Labs which supplied coworking space scholarship.

To date, the Project has cultivated more than 15 ecosystem partners across Atlanta supporting programming activity, which has included Coffee Meetups for Women Founders and Investors and Tech Storytellers, Founders’ Therapy, and more.

Plus, with the newest lead ecosystem partner, a grant from the Walton Family Foundation will support a K-12 tech talent training cohort, which is accepting applications until July 3.

An overview of the Project’s nascent journey and what’s to come followed opening remarks from Sergio Rosas of the Kapor Center, Emily Edwards of Village Capital, and Keisha Senter of Social Capital Markets (SOCAP).

Key Takeaways One Year In

Program operators observed several keystones, said Womack, including that advancement is about being intentional about preparing people and then putting them in the right rooms.

The team also learned social capital is costly, in fact, more costly than financial capital, said Womack. This means branding is key for the startups, he continued. As such, startups have to master quickly explaining what they do in a nutshell.

In the summit’s three panels, the entrepreneurs lauded the program for helping them get through critical points and “exponentially” expanding their network.

Ortez Gude shared that coming in, his company Citri, an operational readiness platform for the air transport (airport) industry, had landed a pilot but was exhausted from trying to stay ahead of that first customer.

The economic instability of the country because of COVID-19 hit his company too, causing revenues to drop 90 percent.

However, the Intentionally Good Project revealed some silver linings. It led Gude to spend time with investors across the country. He got accepted into the Google For Startups Founders’ Academy. And eventually, investors were back to the table as revenue stabilized.

Pivotal experiences were also expressed by the other speakers, including Amanda Sabreah of Staat, Hakeem Atwater of unBoxt, Doll Avant of Aquagenuity, Kyle Pavlock of RideShare Association of America, and Lizzy Levine of Viragoes. Kent Keirsey of Product404 also sheds light on the mentor’s role in the Project.

“This Is The Time To Do It”

If the Project could itself be considered a startup, Womack said its MVP was a newly launched pledge, charging that innovative connectors commit to monthly office hours, introductions, and opportunities. The pledge was initially intended to roll out later this year but got pushed up.

The backbone of the pledge is creating an Intentionally Good Culture, a concept that the last panel of the summit, comprised of Atwater, Barry Givens of TechStars Impact, and Collab Capital, Justin Dawkins of Collab Studios, illuminated. Givens described a culture where people are readied to accept business and career breakthroughs by the reference of their peers or networks.

The backbone of the pledge is creating an Intentionally Good Culture, a concept that was illuminated by the last panel of the summit, composed of Atwater, Barry Givens of TechStars Impact, and Collab Capital, and Justin Dawkins of Collab Studios. Givens described a culture where people are readied to accept business and career breakthroughs by the reference of their peers or networks.

As the culture materializes under Womack and the rest of the Project’s team, which includes Ashley Cleveland, Ricquel Jackson, Mariam Camara, and Blanca Garcia, racial and gender equity gaps in the technology sector can close.

***Admission into the program is on a rolling basis. Sign the pledge or reach out to become a partner, sponsor, or individual donor to support the next phase of activation.