Avoid These Errors If You Want Your Resume to Shine

4 Things All Successful Startups Have in Common

Megan Smith, the former Chief Technology Officer of the United States, was a special keynote speaker at last month’s Tech Jobs Tour in Atlanta. Speaking to a crowd of innovators and technologists, Smith talked about the pressing need for the tech industry to have a more diverse and inclusive workforce.

Addressing a large turnout at The Garage at Tech Square, Smith shared her perspective on how innovation is moving beyond Silicon Valley. “It turns out there are 15 meetups in tech in Boise, Idaho; and one of them has 800 people in it,” she said.

In fact, technological innovation happens everywhere, including Smith’s hometown Buffalo, New York. At least, this is what Smith and Tech Jobs Tour has seen as it crisscrosses across the country to connect diverse and non-traditional tech talent with jobs. Atlanta is the 24th stop of its 50-city yearlong nationwide tour.

With her slide presentation on display, Smith talked about the three waves of the digital age. The first era was consumers just getting online, which initially averaged out to a fraction of Americans being online for roughly one hour each week. The second wave kicked off around the year 2000 with the rapid proliferation of social networking platforms. The third wave, where we are increasingly finding themselves in now, is “digital everything” said Smith speaking from the stage.

The digital age has the potential to disrupt countless industries

Consequently, digital has the potential to disrupt countless industries. From agriculture and tourism to healthcare and education, communities have to reimagine their sector. The standard is being raised to a whole new level.

This presents unprecedented opportunities, particularly for technical jobs. This year, the number of open tech jobs reached 627,000. That number doesn’t just represent people employed by tech companies, it includes technologists in other industries as well, according to USA Today.

Still, the U.S. can no longer continue to recruit from a select and relatively homogeneous pool of talent. So Tech Jobs Tour is making it its mission to place the current and next generation of diverse technical talent in front of startups and companies that can hire them. This includes women, people of color, LGBTQ, veterans, and people with disabilities. These innovators are also acquiring the skills needed to remain competitive through more affordable and accessible coding boot camps and online education programs over 4-year Computer Science degrees.

“It’s important that all Americans are in this future economy,” Smith told UrbanGeekz. “We have so much talent, our greatest strength of this country is its people and the diversity and breadth of our people. Diverse teams just make way better products and have much better financial results. So not only is it the right thing to do, it is the profitable and smart thing to do,” added the former Google exec, who is now at the helm of shift7, a community organizing innovation, for impact and economic inclusion.

Another issue Smith mentioned in her speech was that a staggering 90 percent of Venture Capital goes to men, with a mere 1 percent going to black founders. “One of the challenges is that the system accelerates some people and the system doesn’t accelerate others,” she said. She called it an inherited problem that needs to be fixed.

She also mentioned a culture that feeds images of subservient females that all but erases the genius that has comes from women. Smith used several examples, including research that shows men speak more often than women in Disney movies.

After Smith’s speech, members of the tech community and local tech leaders continued to engage and network. In each city, the Tech Jobs Tour also provides an opportunity for attendees to participate in a career fair, speed mentoring, a coding bootcamp showcase. 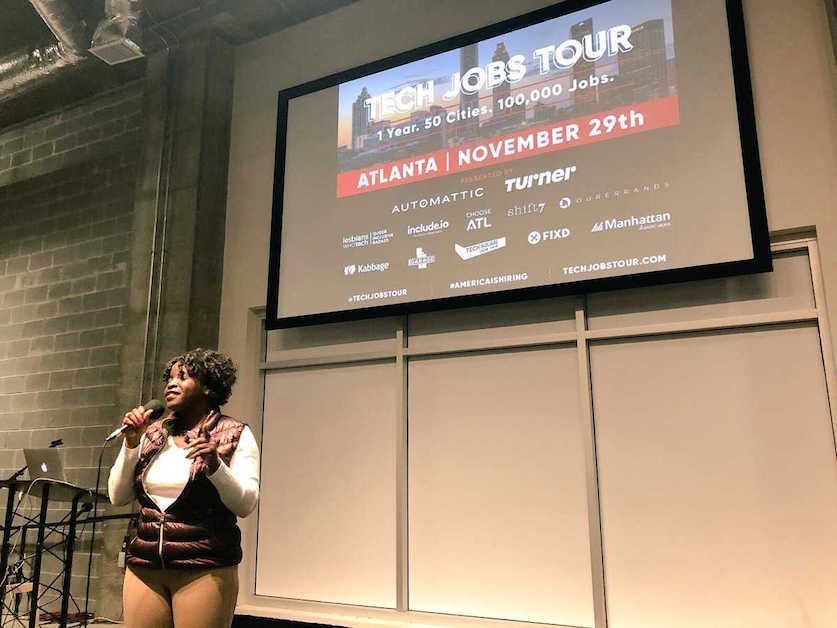 “As a tech entrepreneur of color working in the philanthropy sector, there are not many opportunities to ‘touch’ so many job seekers from so many communities,” said Quinetha Frasier, who was one of the invited speaker at the event.

“TheTech Jobs Tour was a true demonstration of how a company, project, or community can be intentional about increasing diversity in the technology sector,” said Frasier, who spearheads Social Impact Advisor along with FinTech startup MyPledger. “Megan Smith inspired attendees by illustrating the spectrum of innovators who have innovated solutions to a myriad of social, economic, and environmental issues across the globe.”

Two lighting talks were held featuring Scott Henderson and Chief Connector at Sandbox ATL. Stacey Abrams, Candidate for Governor of Georgia made a special appearance to address how Georgia can grow into a strong, competitive state with diverse and inclusive tech opportunities.

As Tech Tour Jobs continues to travel across the country the event will no doubt continue to excite and inform local innovators about the tech industry and job opportunities in their region. The tour is produced in partnership with Automattic, Shift7 and include.io.